FCIDC Board Members, Staff, and friends recently gathered at the St. Albans Museum for its annual reception.

Kathy Lavoie received the Rick Manahan Award for her community service.  As part of her presentation, Catherine Dimitruk, Executive Director of Northwest Regional Planning Commission, read a note from Governor Phil Scott who noted “I know she cares deeply about her neighbors and the future of Vermont.” 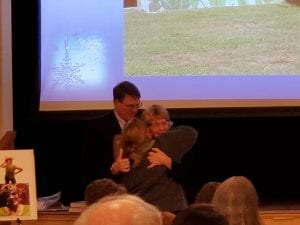 Speaking of her current work at the Franklin Grand Isle Restorative Justice Center, Ms. Lavoie said, “Working with individuals who need direction, who need a break is what we should do as a community.”

Ret. Adm. Warren Ham and his wife, Barbara Hamm, received the Bill Cioffi Award, which was named for the late city manager and longtime chair of the FCIDC board in recognition of their long-time service to St. Albans. 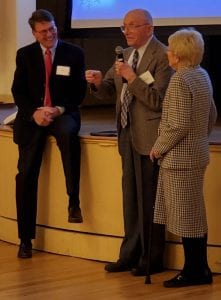 Warren, who graduated from Bellows Free Academy in St. Albans in 1946, returned to the area in the mid-1980’s, having retired from the U.S. Navy. With him was his wife Barbara.

“They could have enjoyed retirement,” said FCIDC executive director Tim Smith. “But instead they dove into the community.”

Kathy Lavoie rounded out the evening by presenting the Business Award to 14th Star Brewery.  The company, located in St. Albans, hosts and contributes to numerous fundraisers throughout the year, organizes an annual music festival in St. Albans Bay Park, and is one of the founders of Last Night. 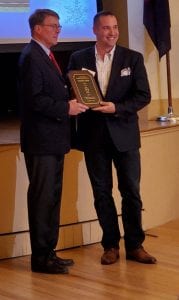 “The army has been very good to us,” said co-owner Steve Gagne. “And what the brewery allows us to do is give back.”

Congratulations to our three award winners.