Fletcher will receive more than $439,000 to continue building out a fiber-to-the-home telecom network along 34 miles of unserved roads.  Highgate was awarded almost $482,000 for the extension of municipal wasterwater lines from Swanton toward the Franklin County State Airport; this is part of a project that includes the potential development of an industrial park.  The Town of Montgomery was awarded more than $500,000 for a centralized wastewater system to serve its two villages.  And in Richford, Northern Tier Center for Health (NOTCH) received $175,000 to convert the grocery store currently run by NOTCH into a non-profit social grocery.

The State of Vermont received a total of $4,430,761.00 in funds through the 2020 NBRC State Economic & Infrastructure Development Investment Program.

The Northern Border Regional Commission is a Federal-State partnership for economic and community development in northern Maine, New Hampshire, Vermont, and New York. 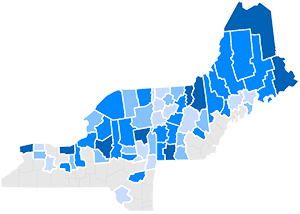 Each year, the NBRC provides Federal funds for critical economic and community development projects throughout the northeast. These investments lead to new jobs being created and leverages substantial private sector investments.