Governor announces opening of another section of the LVRT

Vermont Business Magazine Governor Phil Scott and the Vermont Agency of Transportation (AOT) on Tuesday announced the opening of an additional 6.3 miles of the Lamoille Valley Rail Trail (LVRT) between Sheldon and Highgate. This section of trail begins at the intersection of the LVRT and the Missisquoi Valley Rail Trail and extends westerly approximately 6.3 miles to its intersection with Gore Road in Highgate Center. This new section of the LVRT is now open to the public.

“Outdoor recreation is key to Vermont’s economy and quality of life, and this new section of trail offers exciting new opportunities,” said Governor Scott. “There is no better time than now to get outside and enjoy all the Green Mountain State has to offer, and I hope many Vermonters and visitors get the chance to enjoy the benefits of the Lamoille Valley Rail Trail.”

With the completion of this section, there is now a 12.6-mile segment that starts at the intersection of the LVRT and Bridge Street in Sheldon and extends westerly to its intersection with South River Road in Swanton. 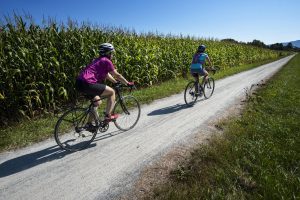